An air compressor problem could stem from one of many issues, such as an air leak, an oil leak or a broken part. In some cases, you might have insufficient pressurization or air flow. In other cases, the compressor might fail to start up or stop running as prompted. Whatever the cause of the problem, the symptoms can be frustrating, costly and time-consuming.

Thankfully, most such problems can be corrected with proper air compressor troubleshooting. The Titus Company has developed this troubleshooting guide for reference when your air compressor won’t work. Whether you’re hearing excessive noise from your portable air compressor or your system won’t build pressure, you’ll find the cause here — and, hopefully, a solution. If not, call us. We’ll be there quickly with our 24/7 emergency services.

Good air pressure is essential to a well-powered machine. When air is leaking from your tank or hoses, you’ll notice low pressure, which brings on extra time and energy costs that can leave your business behind. An air leak could be down to one of several factors. Fortunately, leaks can be sealed with the right kind of air compressor troubleshooting. The following symptoms are among the most common leak-related air compressor problems:

If you shut off the air compressor on full charge, yet the gauge drops while the compressor is deactivated, you definitely have an air leak. The compressor might even automatically restart just to counter the situation. What you need to do in this situation is pinpoint the source of the leak.

If the air leaks occur only when a hose is plugged into the compressor, disconnect the hose. If the pressure gauge stops dropping, the hose is the source of your leak.

If your compressor is losing pressure through the oil fill tube, check the piston seals. In most such cases, the piston seals will be badly worn and in need of immediate replacement. This is a problem that you should remedy immediately, as worn pistons can cause metal-on-metal friction that could swiftly lead to internal corrosion.

3. Air Leaks From the Hood

Air leaks from under the hood are sometimes encountered on smaller air compressors. To diagnose the problem, remove the hood, run the compressor for a few minutes, then shut it off and unplug the compressor. Feel around the motor parts for any sort of air draft. Chances are, the leak will originate from the tank valve, in which case you will need to remove and clean or possibly replace the valve.

If you notice an electrical issue, you need to take a look at it or have a professional come out as soon as possible. It could be anything from your motor capacitors to misfiring piston rings. If the power cuts out on your air compressor — or the power is insufficient and unreliable — the problem is most likely down to one of the following factors:

Assuming that your compressor is plugged into a working outlet and powered on, the following issues could be causing fuses to blow:

If the tank seems to lug at times of high pressurization, there is probably an issue with the motor capacitor.

An air compressor consumes massive volumes of power at the time of startup. This is known as the inrush, which vastly exceeds the amount of power generally consumed throughout the rest of a usage cycle. To prevent fuses from breaking during this inrush, compressor motors are equipped with starter capacitors, which manage the incoming power. A dimming light is one of the tell-tale signs that the starter capacitor is worn and due for a replacement.

If your air compressor trips off the moment it powers on, the issue is likely caused by trapped air over the pistons. To test for this problem, shut off the tank, unplug it from the power supply and drain the tank of all air. This should relieve the pistons of undue air pressure and allow the tank to start without further issues. Trapped air over the pistons is usually caused by a faulty unloader valve, which should be inspected, cleaned and possibly replaced if the issue persists.

When an air compressor fails to start up, shut down or provide any degree of air pressure while active, the problem could be down to one of several issues. Each case should be taken on its own, as follows:

The compressor should stop once the tank pressure drops to the cutoff point. If this fails to occur, the problem will generally be down to one of two issues:

Pressurization components are at the heart of a compressor’s functions and when they fail, the compressor essentially fails.

If the compressor runs and runs yet air pressure is not forthcoming, the problem is likely due to one of two issues:

Fortunately, pumps and gaskets can easily be changed out. With a simple parts replacement, you should be able to get many more years of performance from the compressor at hand.

If compressor oil works its way into the air lines, the effects could be detrimental elsewhere in the compressor because the pump uses a different kind of lubricant than other parts of the system. Once inside the air lines, that oil will be dispersed to other areas, potentially causing seals to crack or swell. Oily air lines are most troubling when the oil travels to plastic parts of the air valve.

The ill-effects of oil on plastic are due to the additives in the oil, which can cause plastic surfaces to become brittle and ultimately split. A plastic lubricator bowl, for example, could split under such circumstances if the air pressure crosses a certain threshold. You can protect the bowl — or contain the plastic in the event of a rupture — by affixing it with a metal shroud.

In a reciprocating air compressor, the oil must first travel past the piston seals to make its way to the tank. When this occurs, the seals should be replaced immediately. This would also be an opportune time to replace the valve and gasket.

As soon as you notice that oil has entered the air lines, check the sump to make sure that it still has a sufficient quantity of oil. If the problem persists, the sump could be depleted of its oil supply.

When removing the oil, take a look at it and ensure it appears clear and consistent. Sometimes, you may notice your oil has a milky look to it — this happens when your air compressor is exposed to excessive humidity and condensation has gotten into the oil reservoir. In this case, you should drain and replace the oil and move your air intake pipe to a less humid environment.

Some of the most common problems with air compressors involve issues with the pressure and flow, which often manifest with the following symptoms:

The main reason to replace an intake filter is when it becomes corroded or damaged. However, the filter could be the source of pressure and flow issues if the intake becomes plugged. Tell-tale signs of trouble include the following symptoms:

If you experience these problems, remove the filter housing from the intake pump and run the compressor again. If the problems cease and the compressor runs normally, the issue is rooted in the air intake media. From here, you have two options — cleaning or replacing. To clean a compressor filter, run water through it until you don’t see any dirt particles.

You can replace the media with various types of filter elements sold at supply stores and car parts shops. The best options are media that resemble the kinds used in air conditioners. Cut the media to the dimensions of the intake filter and switch out the old for the new.

If an air hose is connected to your compressor yet the air is not forthcoming, the issue could be down to one of several factors:

The problem could also be down to the simple fact that the connector on the attached pneumatic tool is ill-suited for the coupler.

3. Air Only Comes in Short Bursts

If an air compressor seems to have stopped working due to a broken part, you first need to test the part to verify the root of the problem. A compressor will not work if the following parts are broken. Fortunately, all can be replaced: 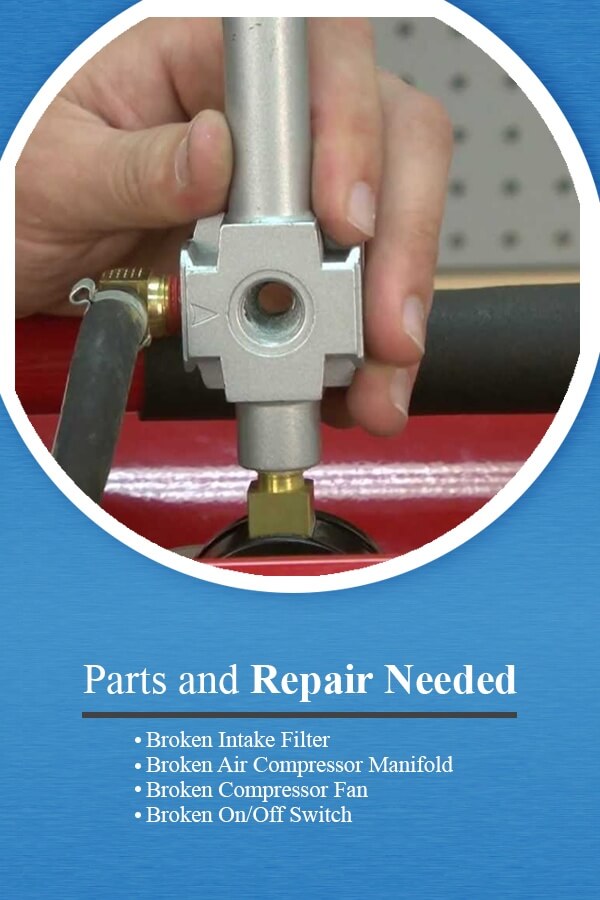 The intake filter is a crucial part of the air compressor because it strains impure particulates from the incoming air. Since it physically sticks out from the rest of the unit, an intake filter is one of the more easily broken parts to an air compressor. Fortunately, it is also one of the easier parts to replace. As long as you find a filter with the same thread size and roughly the same portal size and diameter, it should work for your machine.

If you break the pressure switch on an air compressor, you might be surprised by the underlying complexities. Fact is, any old replacement switch will not solve the problem due to all the connecting points of the manifold. To fix the problem, you will need to find a switch that accommodates each of the four or five connecting points, which will generally include sockets for the pressure relief valve, the air tank gauge, the compressor tank and the quick coupling.

Before you buy a new pressure switch and manifold, take note of the following details on the old switch, each of which must be matched on any new switch you attach to the compressor:

Be careful to properly thread the ports of the new manifold onto their corresponding parts of your air compressor.

Many newer air compressors — particularly those on the lower-cost end of the spectrum — blow air with fans made of plastic, which is less expensive than metal but is also more easily prone to wear and tear. Fortunately, a replacement fan made of either material will work in almost any compressor. Therefore, if you have a fan with broken plastic blades, you could turn this into an opportunity to upgrade to metal.

Before you pick a replacement fan, check the compressor manual for a listing of the part number and corresponding dimensions. If not found, measure the dimensions and the hole diameter of the original fan. Take note of the number of blades and the direction of airflow, as both details are consequential to the performance and make of the compressor.

If the motor of your air compressor fails to power on when you flip the switch, it could be a matter of the switch itself, though you should run some tests before you draw any conclusions. Check the power cord to ensure that it is plugged into a functioning socket. If the power switch still fails to activate the compressor, plug a light or electronic device into the outlet to see if that powers on.

If the outlet works for other devices but not your compressor, pull back the housing that confines the switch, remove it from the socket and check the compressor owner’s manual for specs on the switch. Make sure that your replacement switch will match the specs and fit the socket.

Get Air Compressor Help From The Titus Company

Air compressors serve all kinds of purposes on a professional as well as personal scale. From pressing plants and factories to repair shops and studios, pressurized air is used to assemble everything from automobiles and aircraft to appliances and home furnishings. Today’s compressors are designed to deliver optimal power with sleek designs through many usage cycles.

At The Titus Company, we offer maintenance on a variety of air compressor types and brands. Contact us today to learn more about our products and services and how we can help you fix an air compressor that won’t work as intended.