Reciprocating air compressors work on the principle of reciprocation, which means to move something back and forth. Also known as piston compressors, these machines are positive displacement equipment, meaning that they increase pressure in air to compress it. Understanding reciprocating compressor design and the types of compressors available is essential to choosing the right model for your application, whether you’re a home artisan or run a factory floor.

What Is a Reciprocating Compressor?

A reciprocating air compressor uses piston-driven crankshafts to pressurize air and other gases, increasing their density while decreasing their volume. Air compression makes materials like natural gas easier to store, transport and use effectively.

Reciprocating compressors store the pistons inside cylinders. Each cylinder has a closed end next to the cylinder head and is finished at the other end with a movable piston. The valves of the cylinders are located at the bottom of the compressor’s valve pockets. During the first stage of compression, air moves into the cylinder via a suction valve, triggered by the movement of the piston. This creates a vacuum.

The piston then reverses its motion, fulfilling the “reciprocating” part of the name, and begins compressing the air in the process. Once the cylinder’s interior pressure exceeds the pressure in the discharge pipes, valves open and allow air out of the cylinder.

How Does a Reciprocating Compressor Work?

Reciprocating compressors usually draw power from a diesel engine. This can be by way of a direct-drive or a belt drive system, either of which will be in continuous operation as long as the engine is on. The entire cycle is facilitated by a mechanism for unloading, and some systems have a governor that is typically mounted directly to the compressor. When a governor is present, it works to enforce specific intake and cut-out pressure. Let’s take a look at some reciprocating compressor basics.

The air exiting the discharge port then cycles through an air receiver tank to smooth out the low-frequency pulsation it acquired during compression.

Once the governor or pressure control device senses that the air in the receiving tank has reached the high pressure cut-out threshold, it signals the compressor to unload. Unloading may be full or partial, depending on the reciprocating compressor design.

As down-stream machinery uses the newly compressed air, the pressure level of the tank will gradually reduce. Once it falls to the pre-determined load point, the control device signals the compressor to re-start the compression cycle and build the tank pressure up once again.

Ensuring your compressor is operating within duty cycle limits is essential to maximizing its service life. Choosing an undersized compressor for your application or artificially increasing the load by ignoring air leakage will push the system beyond its capabilities and result in costly premature wear and tear in multiple components of the compressor.

Not every reciprocating compressor design works this way, but it is possible for the drive engine pump to share some of its lubrication with the compressor. In this design, the supply from the sump is essential to keeping the whole system lubricated and functioning properly.

In this configuration, you would need to alter the lubricant change-out intervals recommended by the engine supplier, as they would not take into account the extra needs of the compressor. The new schedule must consider the heat load that the compressor adds to the lubricant if you want to get an accurate gauge of the lubricant’s lowered life expectancy.

The cooling methods in a reciprocating compressor are crucial to the longevity of the equipment. Without them in place, the danger of exceeding temperature limitations is much greater if your application surpasses the recommended duty cycle.

Whenever lubricant becomes too hot and the temperature exceeds manufacturer recommendation, the lubricant could break down prematurely. This means having to change the lubrication more often at best, and early failure of components in the compressor and engine at worst.

Businesses of all sizes use reciprocating air compressors. Some of the industries that make heavy use of this compressor type include auto service, dental service and a variety of recreational services, for example. Here is a quick look at some of the most common compressor uses for businesses ranging from small to medium size:

Air compressors are also common in the agriculture industry, for uses such as:

Compressed air is also an essential power source for large businesses in the manufacturing industry. Fabrication, assembly, refinery plants and more use compressed air to power:

In terms of everyday applications, air compressors are more essential than most people realize. Refrigerators and freezers use air compressors to cool air within the unit, and air conditioners use them as the main source of power for cooling. Even recreational activities like paintball and scuba diving make use of air compression. 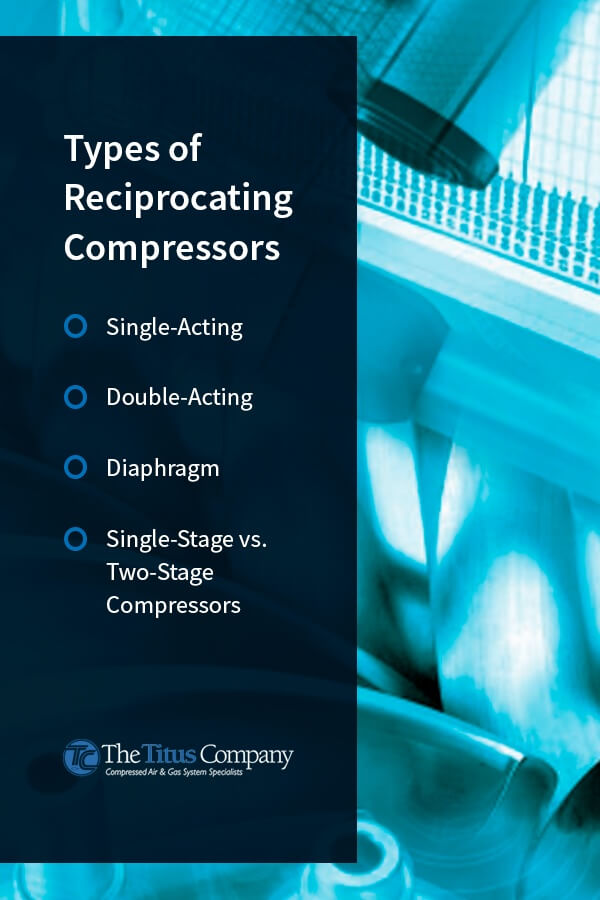 With reciprocating air compressors, you have a few options based on your application.

In a single-acting compressor, you have the basic setup with an inlet valve and a discharge valve, both of which are one-way and spring-loaded. The inlet valve sucks air in while the piston moves downward, and the discharge valve opens only after enough force has been applied.

A double-acting reciprocating compressor has discharge and inlet valves on either end of the cylinder, resulting in two compression cycles with each turn the crankshaft completes.

This design makes double-acting reciprocators incredibly efficient, which is why they are so prominent in the manufacturing industry. It’s rare to find a double-acting compressor under 100 horsepower. However, their power comes with an extremely large footprint that isn’t always practical when space considerations are significant. They also tend to produce a lot of vibration, which requires vibration isolation and making sure the system is set on a solid enough foundation.

A two-stage compressor works very similarly to a single-stage system, but the compressed air does not make its way to a storage tank after its initial compression. Instead, it goes through a second, smaller piston to be compressed again with another stroke. Only after the second compression is doubly-pressurized air put through the cooling system and sent to the storage tank.

A two-stage compressor will produce significantly more air power, which is why they are more commonly found in large industrial applications where continuous operation is necessary. Accordingly, more power equates to the greater up-front cost and continued maintenance needs, so you won’t find them in settings where operations can function on less power.

When it comes to your compressor’s speed, you have two options — separable and integral. Beyond the difference in operating speed, a compressor’s function, convenience and cost depend on its type. Whether you have a separable or integral compressor also determines how the machine is designed and how often you can move it.

Separable reciprocating air compressors are high-speed machines, often working between 900 rpm and 1,800 rpm. These compressors get their name due to their design. The compressor and its driver are separate parts, allowing the use of large motors or engines to increase speed. This self-contained modular design makes separable compressors much easier to install and move. While the upfront costs of ownership might seem more manageable, these machines generally need more maintenance than their slower counterparts.

The American Petroleum Institute (API) classifies integral reciprocating air compressors as low-speed. Generally, this type of compressor runs between 200 rpm and 600 rpm. They’re “integral” because the compressor is integrated into a frame that holds anywhere from two to 10 driving cylinders. While they have a higher installation cost and require more upfront work to establish them, integral compressors are highly efficient in their work and have longer life spans than separable units. In stable operations that aren’t constantly relocating, integral units are preferable.

Diaphragm compressors are also called membrane compressors. They use a rotating membrane to pull air into the compression system. A diaphragm reciprocating compressor makes use of two systems — a hydraulic system and an air pressure system with a flexible metal diaphragm acting as a protective barrier between them. The membrane and compressor box are the only components that come in contact with the pumped gas, making these compressors more commonly used to compress toxic or explosive gases rather than just air.

How do reciprocating air compressors measure up to rotary screw and centrifugal compressors, and what pros and cons should you consider?

Reciprocating air compressors need careful attention to the pistons, but they also have an array of other components that must be monitored for wear. Valves, connecting rods, crankshafts and more must work in harmony to ensure minimized wear, but the number of components makes it more challenging to monitor effectively. However, the parts are less expensive and complex than those of rotary screw and centrifugal compressors, lowering maintenance costs overall.

The heat produced during the operation of a compressor has a tangible effect on the durability and longevity of the equipment. A rotary screw compressor uses screws that rotate around each other without touching and therefore produces less friction. Reciprocating compressors, however, produce significant internal friction between the movement of the pistons and other internal components. Operating in this hotter environment is another reason reciprocating compressors have greater maintenance requirements.

The initial cost of a compressor is a major factor for most buyers. A reciprocating compressor offers more power for less cost upfront compared to rotary and centrifugal compressors. However, the service life expectancy of a reciprocating compressor is lower than either of its competitors. Both rotary and centrifugal compressors have fewer moving parts that suffer from friction, so they cost less in terms of part replacement, downtime, and repairs. However, with regular preventative maintenance, these costs can be somewhat mitigated.

Trust The Titus Company With Your Air Compression Needs

When it comes to your air compressor needs, working with a company you can trust will save you money and bring you better peace of mind. The Titus Company has been providing air compression customers with world-class sales and service since 1986, and we are proud to share our expertise with companies of all sizes in Delaware, Maryland, New Jersey, Northern Virginia, and Eastern Pennsylvania.

We also have the skill to design and fabricate unique systems to suit your applications. We install the system and also provide maintenance to keep your equipment running strong. To learn more about The Titus Company and what we can do for you, reach out to us online or call us at 610.913.9100.