How Do Industrial Gas Generators Work?

Many common industrial applications call for pure nitrogen or oxygen. Shipping canisters of nitrogen and oxygen to your facility from external suppliers is possible, but it has several disadvantages. High shipping costs add up to high operating costs for the facility, and shipping delays can lead to production delays. Long-distance shipments also consume tremendous amounts of fossil fuels and raise the facility’s carbon footprint.

What Are Nitrogen and Oxygen Generators?

What is the purpose of a nitrogen generation system? Many businesses require nitrogen to help their processes run smoothly. For example, the food and beverage industry often uses nitrogen in canning, bottling and preserving food products, as well as in freezing food products.

Much of the air we breathe — about 78% — is nitrogen. Oxygen accounts for only about 21% of the air. A nitrogen generator works by separating the nitrogen molecules from the air and creating a pure, concentrated volume of nitrogen that the facility can use. A nitrogen generator is relatively quick and easy to install, and it makes using nitrogen in industrial applications more convenient.

Oxygen generators work similarly to nitrogen generators — they isolate oxygen molecules and separate them from the rest of the air, creating a pure form of oxygen that can be used in industrial applications.

As with nitrogen, shipments of oxygen from external suppliers can be cost-prohibitive, and many facilities prefer to control their own schedules rather than having to wait for a delivery. Having an oxygen generator installed gives facilities the freedom and convenience of having a supply of oxygen on hand whenever they need it — and at an extremely reasonable cost.

What Is the Difference Between Membrane and PSA Generators?

A membrane nitrogen generator makes use of a permeable membrane as its main component. The membrane is typically filled with thin, hollow fibers. As compressed air enters the filter, it flows to the edges of the membrane fibers through a process known as permeation. Different molecules permeate the membrane at different speeds — water, oxygen and carbon dioxide permeate quickly, argon permeates more slowly, and nitrogen permeates more slowly still. So during permeation, the fibers convey substances such as water, oxygen, carbon and some argon out of the membrane, leaving primarily nitrogen and a little argon behind.

The housing of the membrane generator contains an orifice known as the permeate vent. This opening allows the oxygen, carbon and argon to escape so that these gases don’t build up too much pressure in the generator and reduce the efficacy of the membrane.

A PSA nitrogen generator typically contains two vessels, or towers, that contain CMSs. Most CMSs are made of anthracite coal with an effective pore diameter of 0.4 to 0.9 nanometers. The other molecules bind to the CMS, but nitrogen molecules are too big to fit into the pores, so they pass by unimpeded. At this point, most of the nitrogen stream flows out of the tower — it is ready for the facility to use it.

After the CMS adsorbs the oxygen molecules in the first tower, however, a small amount of the air continues into the second tower, which has also been adsorbing oxygen and generating pure nitrogen. The small stream of air flows in the opposite direction from the flow of the initial stream of air. By flowing in the opposite direction, this small stream of air dislodges all the oxygen particles that the CMS had previously absorbed. This action regenerates the CMS and enables it to adsorb more oxygen and keep producing more pure nitrogen.

When the small stream of nitrogen dislodges the oxygen molecules from the second tower, the pressure inside the two towers equalizes. Once the pressure has equalized, the two towers also change phases — the tower that had been full of oxygen and regenerating starts adsorbing, and the tower that had been adsorbing and producing nitrogen, and is now full of adsorbed oxygen, starts regenerating. This alternation of phases is called a “swing of pressure” and is the reason the technology is called “pressure swing adsorption.”

Differences Between PSA and Membrane Generators

Membrane generators offer a few different advantages over other types of generators — they tend to perform better at higher temperatures, for one thing. They have a simpler design and operating procedures, so they require less maintenance, run up fewer repair costs and have smaller installation footprints. This latter property makes them ideal for installations in cramped or crowded spaces. They also start up relatively quickly and quietly, offer reliable pressure and flow stability and can run without electricity.

Pressure swing adsorption is essential in applications that require a high level of purity of the nitrogen or oxygen produced. In some applications, such as filling tires, the level of gas purity is less important. But in certain applications, such as food and beverage packaging or pharmaceutical manufacturing, the purity of the gas produced is critical. A PSA generator can achieve pristine purity levels — up to 99.999%, slightly higher than the 99.5% purity a membrane generator is capable of. If your applications require a high-purity nitrogen generator or a high-purity oxygen generator, a PSA generator is an excellent way to go.

One of the main advantages of a PSA generator is that it has a lower air factor than membrane generators. Having a low air factor means the generator requires a lower volume of compressed air to produce the same amount of nitrogen or oxygen. Using less compressed air means consuming less energy, which in turn means greater cost savings and a lower environmental impact. A PSA generator can also generally supply higher volumes of nitrogen than a membrane generator can.

One other advantage of using a PSA generator in industrial applications is that it is slightly less sensitive to water than a membrane generator.

How Do Nitrogen and Oxygen Generators Work?

As we have seen, nitrogen and oxygen generators work by separating different molecules out of a flow of air and leaving a pure stream of nitrogen behind. They do not create nitrogen or oxygen — instead, they extract nitrogen or oxygen from the air and store it in a pure form. The operator of the industrial gas generator can specify what purity the machine produces — some applications, such as food and beverage packaging, require a much higher purity level than others.

Nitrogen and oxygen generators typically use either the membrane system or the PSA technology described above.

What Are Oxygen and Nitrogen Generators Used For? 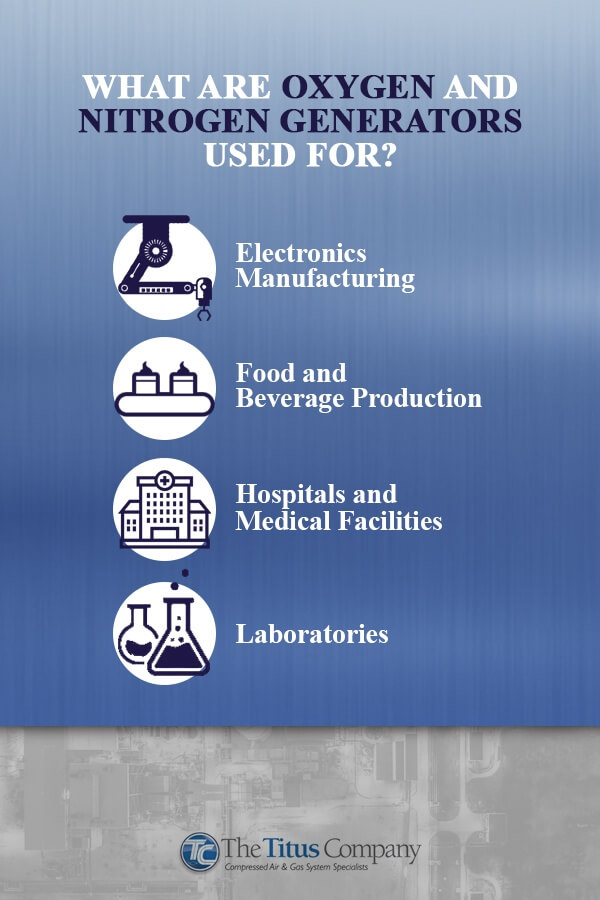 Industrial gas generators find uses in a range of different industries. A few of these are listed below.

The food and beverage industry commonly uses pure nitrogen for processing, packaging and bottling processes. Air that contained oxygen could quickly lead to food spoilage and decay, but air that contains pure nitrogen keeps foods stable and fresh. Production facilities use nitrogen to improve the shelf life of many foods, preserve foods for transport and eliminate the bacteria that cause many foods to perish. Because nitrogen is an inert gas, it is also useful in the food and beverage industry for creating the inert environment necessary for processes like the cold storage of produce and the loading and offloading of tankers.

Nitrogen is useful in the laboratory for similar reasons. It helps laboratories provide the specific environmental conditions necessary for sensitive equipment and processes, such as cell incubators and mass spectrometers. It also helps stabilize substances that could become explosive in the presence of oxygen. Labs that use in-house nitrogen generators eliminate their need to rely on pressurized gas cylinders, which can be extremely hazardous.