The Benefits of On-Site Nitrogen Generation for Breweries 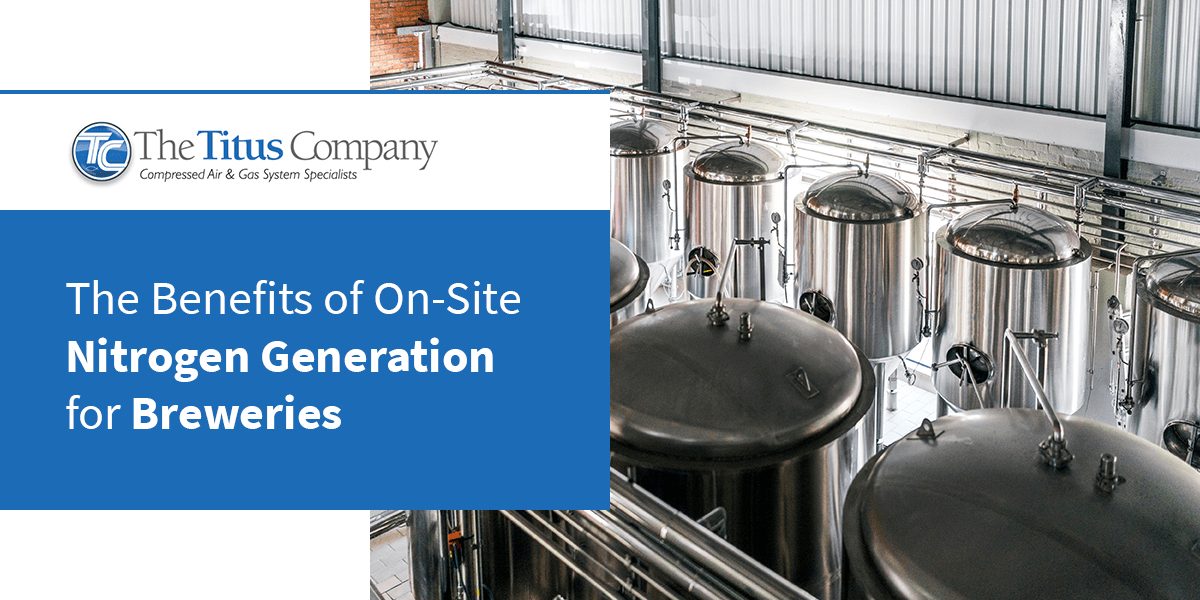 Beer has been produced in one form or another for centuries. While many of the ingredients, such as hops, grain, and yeast, have remained the same, the production processes have changed constantly with technology. From larger equipment to automation, technology has revolutionized the way we brew beer today. One such technology is on-site nitrogen generation.

Here, we’ll discuss the use of nitrogen generators in the brewing process and the benefits they present for breweries of all sizes. 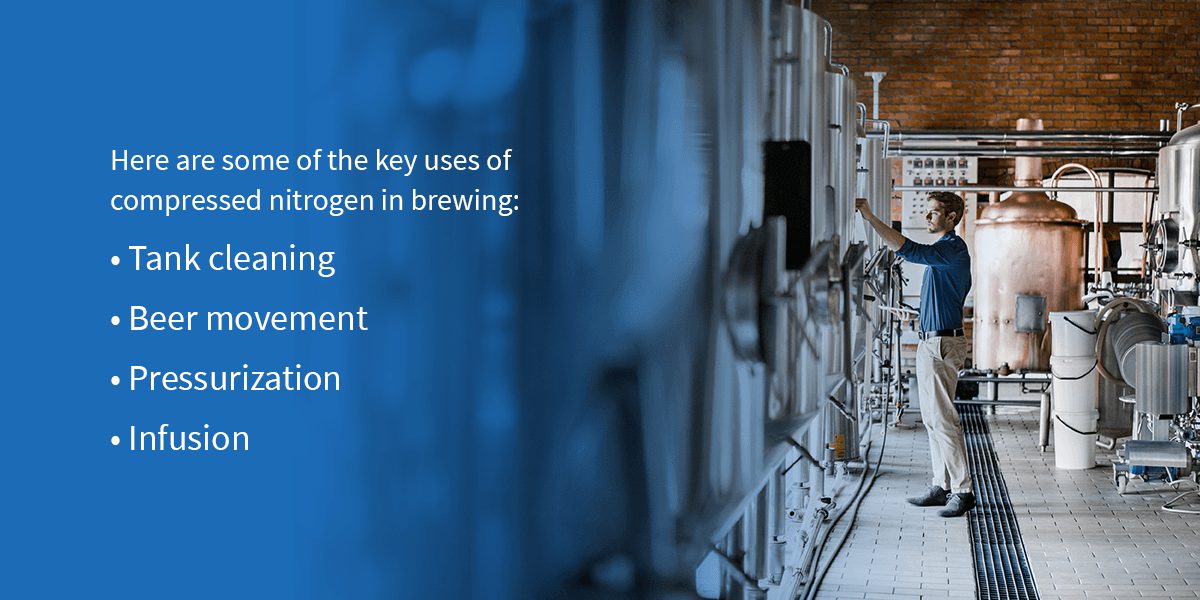 How Breweries Use Compressed Nitrogen

At its most basic form, the brewing process occurs in four steps — malting, mashing, boiling and fermenting. Compressed gases such as nitrogen are used in many of these steps. Here are some of the key uses of compressed nitrogen in brewing:

Nitrogen generators use the ambient air as a primary source of nitrogen. Air is composed of about 78% nitrogen, with the rest of the composition containing oxygen and trace gases. Nitrogen generators work by removing the oxygen molecules in the air. Generators can do this via one of two methods:

Generators are often paired with air compressors, which take ambient air and compress it to feed into the nitrogen generator. Oil-free air compressors are the best choice for this purpose, as they are not lubricated by oil that could contaminate the beer or surrounding equipment. 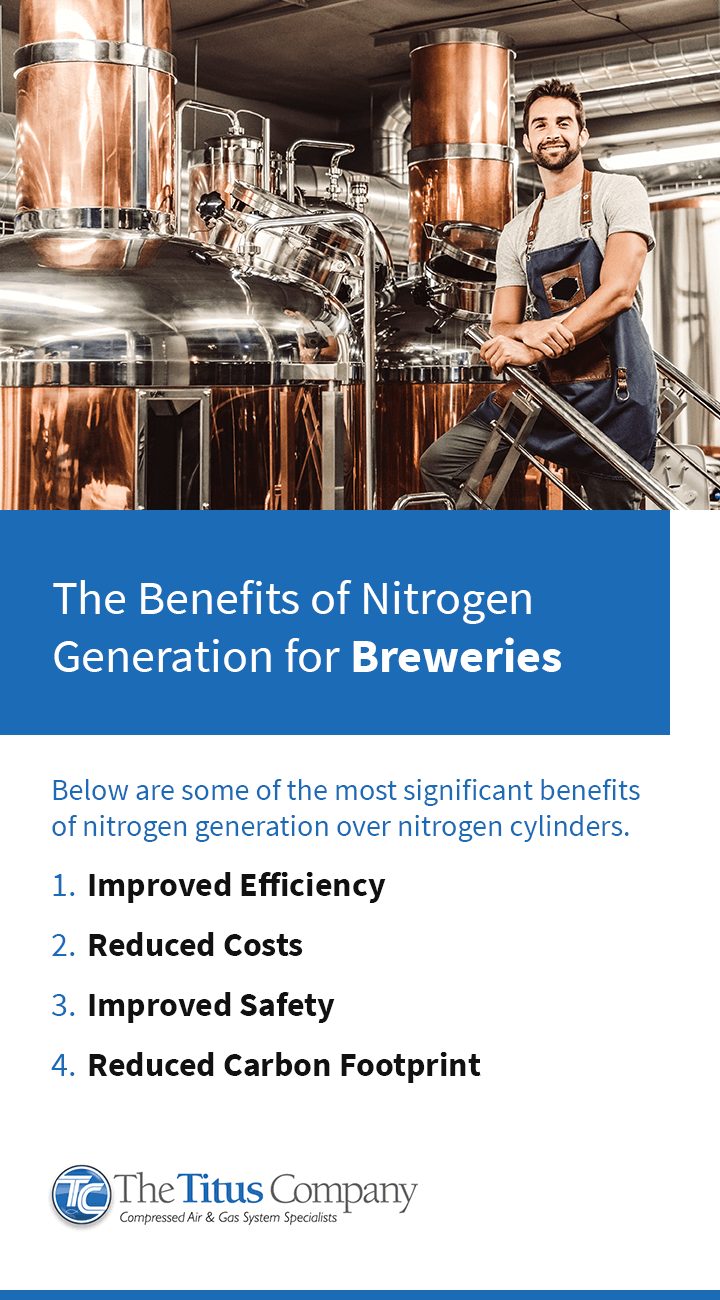 The Benefits of Nitrogen Generation for Breweries

Breweries that use nitrogen bottles utilize a cycle. They order the bottles, receive and store the bottles, hook up and replace the bottles, then reorder when supplies are running low. This process introduces several inefficiencies in brewery production, which can be solved with a nitrogen generator. Some of the key ways nitrogen generators can improve efficiency in your brewery include the following:

All these benefits of nitrogen generators mean more uptime for your brewery and improved utilization of your labor and storage resources.

Utilizing nitrogen bottles in breweries can incur significant costs in various ways. Some of the upfront and hidden costs of using nitrogen cylinders include the following: 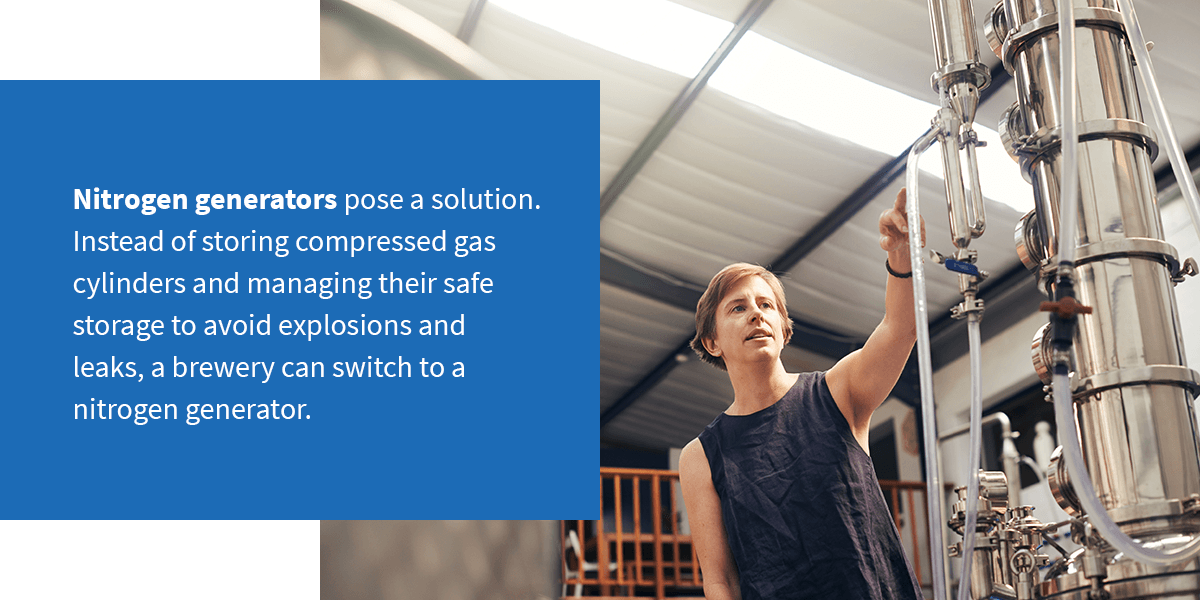 In addition to reducing costs and maximizing efficiency, switching from a nitrogen cylinder system to a nitrogen generator is a safer option. Compressed gas cylinders pose two significant safety concerns:

What’s the Difference Between Nitrogen and Carbon Dioxide for Breweries?

Both nitrogen and carbon dioxide are often used in breweries for pressurization and carbonation purposes. Currently, carbon dioxide is still the most common choice for carbonating beer. However, the two gases are slightly different from one another in various respects. Some of the key differences include the following:

For breweries, these factors most strongly affect which type of gas to use for pressurizing long tap lines. Most beers are pressurized using CO2, but the solubility and bitterness of CO2 can negatively affect the taste of sweet, malty beers. While CO2 is still a good option for more bitter beers, nitrogen is a better solution for malty beers. Typically, a brewery will use a mix of nitrogen and carbon dioxide in a 75:25 or 70:30 ratio to push beers without negatively affecting taste.

Considerations for Implementing Nitrogen Generators at Your Brewery

The benefits of nitrogen generators make them an excellent choice for breweries of any size. If you’re interested in implementing a nitrogen generator system in your brewery, The Titus Company has plenty of options available. Before taking the dive, it’s essential to consider some factors about your brewery. These include:

Knowing the answers to these questions will help your supplier determine the best type of system for your brewery. Once you have your answers, reach out to The Titus Company and we can discuss your options with you. 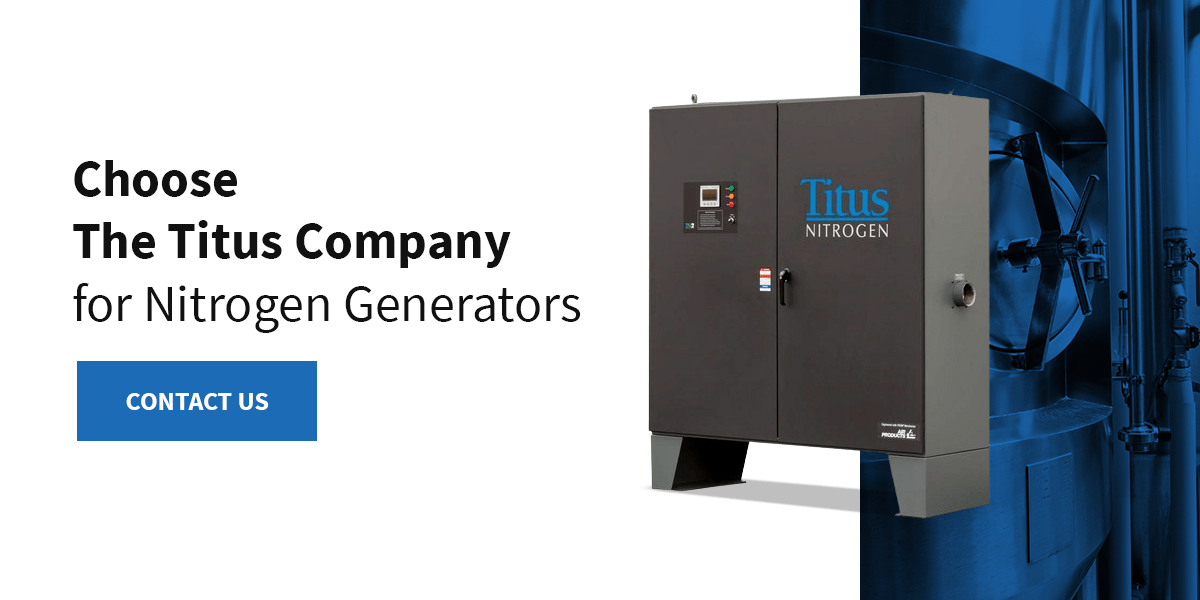 If you’re interested in making the switch to a nitrogen generator system, The Titus Company is here to help. Founded in 1986, The Titus Company has been helping customers meet their compressed air needs for over 30 years. With superior expertise and quality supplies, we serve companies of all sizes across Maryland, Delaware, Southern New York, Northern Virginia, New Jersey and Pennsylvania.

We have experience working with various industries, including breweries, food and beverage producers, pharmaceutical and chemical companies and the petroleum industry. Across our range of products and services, we are focused on the satisfaction of our customers.

Contact The Titus Company today to learn more about our nitrogen generator systems.